Issued in 1924 in the UK, the ÆSOP’S FABLES 25-card set of Typhoo tea cards feature a variety of fables credited to Greek storyteller and slave Aesop (600 BC). These tales usually depict personified animals in different situations and serve as a moral guide for children. Aesop’s best known fables are The Tortoise and the Hare and The Boy Who Cried Wolf. The front of each Typhoo tea card displays a drawing of the fable and a quote about Typhoo tea. The back of each card tells the story. Aesop’s Fables is one of the rarer sets of Typhoo tea cards still in existence today. 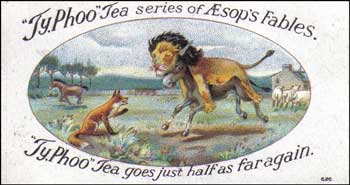 An ass, finding a lion’s skin, put it on, and went about the fields and woods, frightening all the other animals. Presently he met a fox, and not only rushed at him very fiercely, but tried to imitate the roaring of a lion. “Sir,” said the fox, “if you had only held your tongue, I also might have taken you for a lion; but from your bray, I know you to be an ass.”

Moral - Character is known by speech as well as action.

A fox fell into a well, where he was in danger of drowning. A passing wolf, hearing his cries, came running up. “Oh, Mr. Wolf,” cried the fox, “Pray help me out, or I shall be drowned!” “Poor Creature,” cried the wolf, “How sorry I am for you. How long have you been here? How did it happen? The water must be cold! Is it deep?” “This is no time for talking,” said the fox. “First help me out, and then I will tell you all about it.”

Moral - Don’t stand talking when there is work to be done. 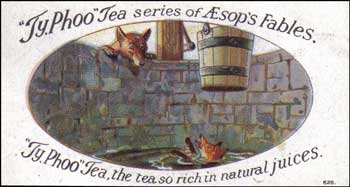 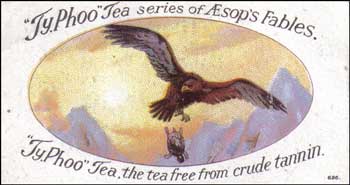 No. 13 THE TORTOISE AND THE EAGLE

A tortoise, grown tired of crawling on the ground, announced that if any bird would take him up into the air and show him the world, he would give him a number of precious stones of which he knew the hiding-place. An eagle accepted the offer, and carried the tortoise into the air, asking him to tell where the precious stones were hidden. The tortoise who had never seen any precious stones of course could not keep his promise, so the eagle dropped him, and he was dashed to pieces on the rocks.

Moral- People who break promises are sure to suffer for it sooner or later.

No. 15 THE TOWN MOUSE AND THE COUNTRY MOUSE

A country mouse one day received a visit from a town mouse, who asked him, “How can you put up with this nasty little hole in a farmyard when you might live in a fine house in town with me, and have nice things to eat?” So he persuaded the country mouse, and the two set out for town, where the country mouse sat on a rich carpet and ate scraps of all manner of nice things. When suddenly the barking of dogs and the noise of an opening door nearly frightened him out of his wits, and he only escaped in time. When he recovered his breath, he exclaimed, “If this is town life, it will not do for me. Give me the farmyard with peace and safety!”

Moral - Do not envy rich people, for they often have more care and trouble than the poor. 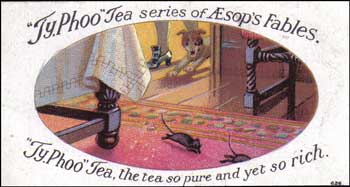 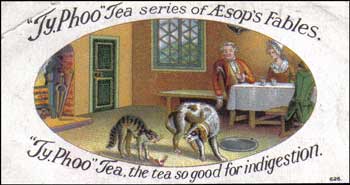 Never did two creatures agree better together than a Dog and a Cat brought up in the same house from a whelp and a kitten, their gambols giving entertainment to the family. But still at mealtimes, when scraps were thrown to them, they would snarl at each other like enemies.

Moral - Self interest is thus seen to be the ruling passion.

No.25 THE COUNTRY MAID AND THE MILK PAIL

A country maid carrying her milk pail, reflected that the money for which she could sell her milk would enable her to increase her stock of eggs, and from them rear a number of chickens to sell at high prices at Christmas, when she would buy a fine dress, so that all the young men at the fair would fight for her as a partner; but she would refuse all of them with a toss of the head. Suiting the action to her triumphant thoughts, down came the pail of milk.

Moral - Avoid day-dreaming as a substitute for duty. 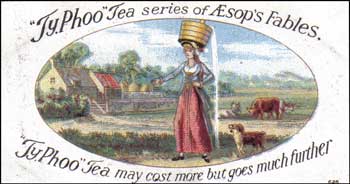