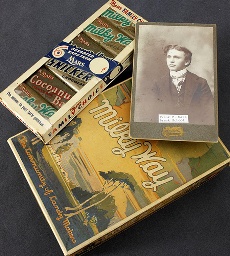 From the Smithsonian National Museum of American History.

Mars, Inc. is a global enterprise best known for its confectionary brands like SNICKERS®, M&M’s®, MILKY WAY® and MALTESERS®. Other well known brands include WHISKAS®, Pedigree and UNCLE BEN’S®. Although many of Mars’ products are primarily sold in the UK, the company has its roots in the United States.

Frank C. Mars was born in Minnesota in 1884. After suffering from polio as an infant, Frank was unable to walk. Frank’s mother enjoyed making candy and kept him entertained by allowing him to hand-dip chocolates. At age 19 Frank started a candy business and married Ethel G. Kissack. Soon the couple had a son, Forrest Edward Mars. Unfortunately both the business and the marriage would ultimately fail.

In 1910 Frank remarried to Ethel V. Healy. The next year the Mars family began to make butter cream candy from their home and would soon rent their first candy factory. The Mars Candy Factory, Inc. employed 125 workers in Tacoma, Washington and sold candy to 5 and 10 cent stores along the Pacific coast. Since there was no refrigeration, candy has to be made and delivered in the same day.

The company moved to a larger factory in Minneapolis, named the "Nougat House," in 1920. Soon after the move, Mars Candy changed its name to MAR-O-BAR. The actual MAR-O-BAR, the company’s latest creation, proved to be too fragile to withstand transportation. This failure led to the great success of the first MILKY WAY® candy bar in 1923. With the help of the new chocolate malted milk bar, annual sales increased from less than $100,000 to $793,000. The company hired a full-time sales staff.

Dropping the name MAR-O-BAR to Mars, Inc., moved a second time to Chicago. Chicago’s railway system allowed candy, including the new SNICKERS® bar, to be distributed to locations across the country. Frank’s son, Forrest, the black sheep of the family, had joined the family business. In the 1930s, Frank gave Forrest the formula for MILKY WAY® and $50,000 to start his own candy business as issues between the two could not be reconciled. Forrest started the first international branch of Mars, called Mars Limited, in Slough, UK. With so little money he bought used equipment, acquired a small factory and was assisted by four employees. The MILKY WAY® recipe was adapted to suit European taste and the first MARS® Bar was born. When Frank Mars died in 1934, his son merged the American and UK Mars companies together to form an international enterprise.

The 1940s also saw the creation of M&M's®. Joining an 80/20 partnership with the Hershey Corporation, Forrest established M&M Limited, which would later become M&M Candies, while back in the United States. M&M® was named for the last names of Forrest Mars and Bruce Murrie. Bruce, the son of Hershey executive William Murray, agreed to provide chocolate, sugar, technology and some capital. The first M&M’s® were produced in 1914, packaged in a paper tube to prevent melting in warm weather. The candy was originally made with brown, yellow, orange, red, green and violet (later replaced by tan) shells. 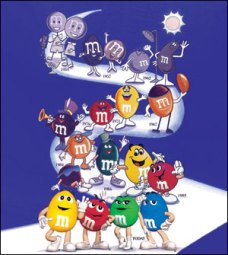 M&M's® became very popular with soldiers because of their ability to withstand warm temperatures. During World War II, M&M's® were added to soldiers’ C-Rations. After the war Mars bought out Murrie to become the sole owner of the M&M® brand. In 1945 the new slogan, "The milk chocolate melts in your mouth, not in your hand," was introduced. To set M&M’s® apart from imposter candies, Mars began to print a small "m" on each piece in the 1954. The world famous M&M® characters made their debut in the same year. To celebrate the launch of the blue M&M® in 1995, the Empire State Building featured blue lighting. In the year 2000 M&M’s® were named “The Official Candy of the New Millennium” since the numerical value of MM is 2000.

Mars had stepped into the main meal business in the 1940s with many varieties of rice and a new technology called parboiling. Mars' rice was a staple to the U.S. Army during WWII, and after the war the rice company became UNCLE BEN’S® Inc. Uncle Ben’s rice became the top selling rice in the U.S. and is now the top brand of rice worldwide.

Forrest Mars retired in 1969, leaving the business to his sons, Forrest Mars, Jr., John Mars, and Jaqueline Mars Vogel. Forrest Mars, Sr. died in 1999 at the age of 96. In recent years Mars has submerged itself further into the pet food market with the adoption of Royal Canin Petfoods and NUTRO®. Its pet food factories have the reputation of being incredibly clean. In 2005 Mars launched KLIX® Outlook vending machines in the UK, France and Germany. These machines offered more selection options for consumers.

Mars is a very private company, which rarely interacts with the media because it wants to be known for its products rather than its executives. The company’s secrecy is legendary, and many rumors have circulated about the Mars’ management skills and other business factors. The business’ structure is unconventional with no executive offices and no executive parking spaces. Low ranking and high ranking executives sit together to improve functionality and communication.

Mars runs its business based on the philosophy of five principals:

Although Mars remains a family owned company, its sales on a steady increase and it has more than 40,000 employees. Through clever marketing, new product innovation and the acquirement of other companies, Mars has become an industrial giant. With $20 billion in sales in 2006, and operations in 100 countries on five continents, Mars will continue to grow and prosper for years to come.

"Inventor of the Week: Forrest Mars, Sr."Massachusetts Institute of Technology.