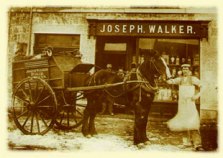 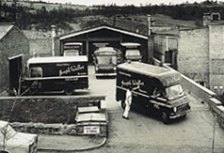 Walkers, a name synonymous with classic pure butter shortbread, is the number one food exporter in the UK, employing over 4,000 people in 15 locations. The company began in 1898 in Torphins, a small village in Scotland. Twenty-one year old Joseph Walker took out a loan to open a bakery and worked tediously to perfect his recipe for shortbread. He used only the finest ingredients including pure creamery butter. The shortbread was free from additives, artificial flavoring, coloring and preservatives. The business boomed, and Joseph soon moved to a larger shop in Speyside village

In the 1930s Joseph’s sons, James and Joseph, became involved in the business introducing new ideas for cakes and confectionary and offering delivery. With their new delivery van, they could sell their products in a further radius. However, the onset of World War II prevented the brothers, who were Home Guard volunteers, from expanding their range of products. Wartime rationing made business difficult as well, but Walkers continued to supply bread and oatcakes to its customers throughout the war.

Joseph Walker (senior) died in 1954, and his sons continued to run the family business. They used Joseph’s original recipe, creating a line of products made from pure creamery butter and not the less expensive margarine other manufacturers were using. By 1961 James’ daughter and two sons began working for Walkers, adding a third generation to the family firm. Soon Walkers had almost 100 employees, 14 delivery vans and shops in other towns. Local grocers began stocking and selling Walkers products, and employees were having trouble meeting the increasing demand. The Walker family decided to invest in baking machinery, which would allow more batches to be made. Before long Walkers Shortbread was sold by the finest stores in Britain.

In the 1970s Walkers was exporting shortbread to 60 countries worldwide. The company continued its expansion and moved to a larger custom-built factory in Elgin by 1975. There Walkers introduced several new products including its specialty biscuits and Chocolate Chip Shortbread. Walkers continued to be a family run business, and its employees were close-knit as well. Husbands, wives and siblings worked together at the Walkers facility, and many of which are still employed there today. The company won the Food from Britain Innovation Award, three Queen’s Awards for Export Achievement, and five gold Mondialle medals for outstanding products.

Despite the company’s incredible expansion since its beginnings, Walkers was always committed to meeting the original product standards set in place by Joseph Walker. Walkers’ products still contain only the best ingredients like plump fruits, creamery butter, real chocolate, fresh nuts, spices and flour. New production technology has changed how Walkers products are made, but the products themselves have remained the same in quality and flavor. 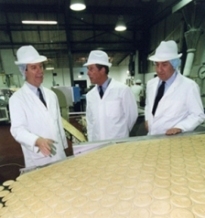 Duchy Originals Limited, which was established by HRH the Prince of Wales, requested that Walkers produce its Duchy Originals Organic Oaten Biscuits in 1992. The prince believed in the production of healthy and all-natural foods, and these biscuits were made from oatmeal sourced from his own estates and others in the Duchy of Cornwall. Walkers was chosen because of its firm belief in using natural ingredients and making high quality products. Duchy Originals are still a popular choice of consumers worldwide.

Walkers also offers a WeightWatchers line of cookies and biscuits, so weight-conscious consumers can enjoy deliciously satisfying snacks without the guilt. Other Walkers favorites include oatcakes, fruit cakes, meringues, a variety of delicious shortbreads. In 2002 by Royal Warrant of Appointment, Walkers became the official supplier of oatcakes to her Majesty the Queen. Walkers products are fit for royalty.

Walkers is recognizable by its packaging, which features a tartan pattern in the background and traditionally Scottish figures, scenes and objects. Popular figures used on Walkers’ boxes and tins include Bonnie Prince Charlie and Flora MacDonald. Some packages feature the two separately and others depict a popular painting by S Joy including Bonnie Prince Charlie and Flora MacDonald in a poignant farewell. In the treasured Scottish tale of female heroism, Flora saved Prince Charlie by helping him escape from Scotland after his defeat at Culloden in 1746. So he would not be recognized, she disguised him as her maid. The painting featured on Walkers’ products shows the final farewell as the prince leaves Scotland.

Walkers is a brand steeped in history, tradition, quality and family values. Today Joseph Walker’s great grandchildren are heading the company, and the legacy will continue for years to come.